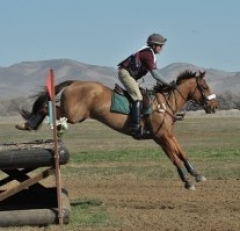 As I’ve gotten older, my active lifestyle – especially training five or six horses a day for the last six years – has begun to take a toll on my body. So I thought I’d tell you about the products made by Back on Track, products that I’ve used for the last year and that have given me great relief from arthritis and tendonitis.

Back on Track makes a line of athletic clothing, joint and muscle braces, and even bedding designed to increase your body’s circulatoin, and thus alleviate the symptoms of arthritis and tendonitis. They also make horse products – blankets, saddle pads, leg wraps and boots.

A friend of mine has used the knee braces for several years, and last year when I was suffering from severe tendonitis in both elbows, she suggested I try the Back on Track elbow braces. I got them in early February, and by April my tendonitis was about 90% gone. A month later, I’d say it was 95% improved, and now my elbows give me only the slightest twinge when I completely bend them. I’d say they are 99% better than they were in January, when I often woke up at night because of the pain.

To achieve the pain reduction I wore the elbow braces 8-12 hours a day. I’d previously been wearing elbow braces that put pressure on your elbow to support the tendons, and although they prevented the tendonitis from worsening, they were uncomfortable and didn’t alleviate the pain. Last week I schooled four horses on a cross country course, an endeavour that strained my shoulders, back and neck and forced me to visit my chiropractor. But my elbows felt fine.

In late June a horse struck my ankle with a front hoof. Within a day it was inflamed and was very uncomfortable. So much so that the next day I went to the emergency room for x-rays to be sure I hadn’t broken my ankle or the tip of my fibula. Fortunately I hadn’t, it was badly bruised. It stubbornly refused to heal so six weeks later I purchased an ankle brace. I’d say within five weeks it was 80% improved. I can flex and turn my ankle without pain.

While I purchased the ankle brace I also purchased a pair of gloves as my hands have become increasingly arthritic now that I’m past 50. After rigorous days of cross country schooling my hands were quite stiff and tired, but after two night they were back to normal.

I suspect my next purchase will be Back on Track socks, because both my big toes have become considerably arthritic from the running I did for 30 plus years.